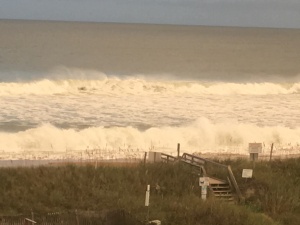 Surf is up due to Southern Fun

I spent the penultimate night on my solo trip up the ICW from Cape Fear back to the Chesapeake Bay at one of the most beautiful and peaceful anchorages I can think of:  Logging Camp Anchorage at the south end of the Alligator River in North Carolina.  It is not a usual place for High ZZ’s to spend the night, always striving to find shelter from contrary winds or inclement weather.  Up north, our big weather usually comes in from “Nor-Easters”.   But in the spring and summer, those of us scurrying north to escape hurricane ally sometimes hide from “southern fun” (don’t know why they call it that…it is usually not that fun).  This recent case of southern fun, the remnants of tropical storm Alberto, had been chasing High ZZ’s north all the way from Florida, and had finally caught up in Swansboro, NC.  After two days in monsoon conditions, everything above deck was soaked, below deck was dank, but thankfully, not wet (remarkably, I still have not discovered any deck, hatch or port leaks in our 21-year-old boat).  I was getting tired and feeling a bit melancholy.  And the sky still looked quite gloomy, although the southern winds had diminished.  With no other boats around, it promised to be a quiet night “on the hook”…or so I thought. 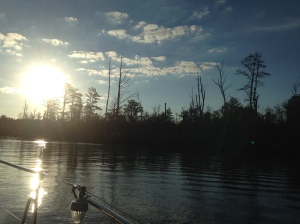 Sunrise on the Alligator River

Anchoring by your self is easy, as long as there is plenty of space to drift while you are on the bow…but, luckily, going forward with no one at the helm is unnecessary for me as High ZZ’s also has windless controls in the cockpit.  I can power forward or back as is necessary while controlling the anchor chain as it feeds out.  The engine is still running when dropping the anchor as I always power back hard in reverse to insure that it is well set.   Since Miss Deb and her smarty-pants phone, with its anchor watch APP, was AWOL, no alarm would go off if High ZZ’s started dragging.   I needed a good night’s rest, so I set the anchor extra-hard!  But my vision, or should I say hearing, of a quite night was immediately trashed as soon I shut down the engine.   The cheerful clack-a-ty-clack of our trusty Yanmar turning over at idle was replaced by the almost defining sound of croaking frogs, chirping swallows, laughing gulls and screeching ospreys.  I was “at home”. I loved it! 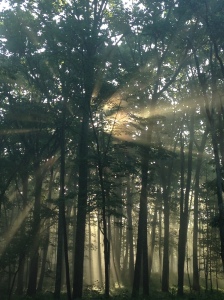 Logging Camp anchorage hits a home run in my ballpark on several fronts.   The cacophony of nature was just what an old forester needs as white noise for a good night’s rest.   And what could be better than a logging camp?  I miss the, sights, sounds and smells of the woods, having spent the vast majority of my time on the water or on the beach for the past 4 years.  A special channel was cut from the ICW into the camp to allow log barges to be loaded for transport to distance mills.   That same channel, long since abandoned, was still deep enough for High Zz’s to cozy up to the shore and woods.  And what a beautiful woods it was.  Loblolly pine, sweetgum, and even numerous baldcypress stood straight and tall where once, only stumps remained.  The forest was rejuvenated, and so was I.  I had been tired, and lonely without Admiral Deb, but in the morning, I was refreshed and ready for the last push up the ICW to the Chesapeake Bay where High ZZ’s and I would be reunited with our love. 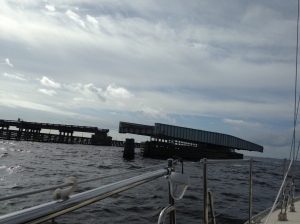 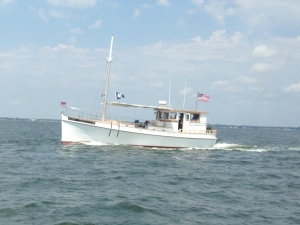 Back on the Chesapeake 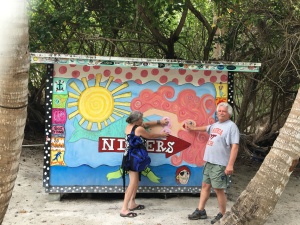 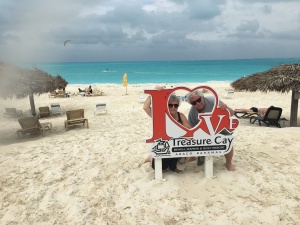 It’s true!  My daughter Constance is brutally honest about it.  “It” referring to the extra mass that grows near my beltline while spending months cruising on High ZZ’s.  After some extended time at the house in Venice last fall, she remarked in her usually bubbly way:  “oh look, you have lost your belly”; gleefully patting my done-laps disease.   You see, all of the sundowners on High ZZ’s and friends boats, all the extra food and drink, none of the regular daily bike to the beach and have a run I get while at the house…let’s see, did I mention all of the extra drinking that accompanies the cruising life?  After months on High ZZ’s I do tend to get “Boat Belly”.  No one sets out to purposely get boat belly.  It just kind of sneaks up on you, growing with every evening spent with friends and relatives that meet in the cockpit for drinks and snacks as the tropical sun sets. 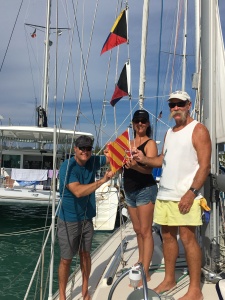 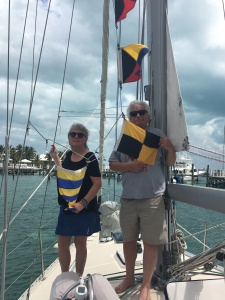 This year’s Boat Belly was curtesy of Rob, Sandra, Pat and Janey; and the Abacos, in general.   Yes, I do “blame” others for this malady of excess flesh.   Let me start with the Abacos.  They are that large group of northern Bahamian islands known as “Eastern Florida”.   Why the dubious distinction, you ask?  Well, the Abacos has everything that Florida has to contribute to Boat Belly.   You see, there is Snapper’s in Marsh Harbor, there is Captain Jack’s in Hopetown, there is Cracker P’s in Lubber’s Quarters, there is Pete’s Pub in Little Harbor.  And the worst are Nipper’s and Grabber’s on Great Guana Island.  These are all waterfront bars with large beer selections and rum drink concoctions; and, most important, conch fritters.   Ok, ok….so yes, many waterfront bars in every eastern US state offer beer and rum, but it is those conch fritters that are a deeper than deep-south specialty contributor to Boat Belly.  Luscious gooey versions of southern deep fried batter (like hush puppies) with bits of conch and seafood spices (like Old Bay) in them.   Those conch fritters are important contributors to Boat Belly. 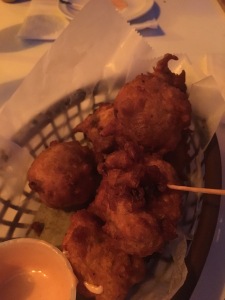 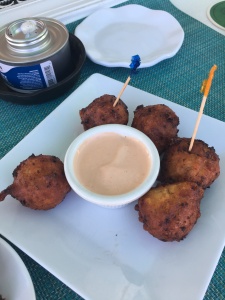 But it is also the easy accessibility of the Abacos to fly-in friends and relatives that forces us to try all of the rum concoctions, and evaluate all of the conch fritters that these lovely group of Bahamian islands has to offer.   There must be 10 flights per day into Marsh Harbor and Treasure Cay from somewhere in the US.  And the protected waters of the Abaco Sound, all the great sailing, snorkeling, beach combing, within three hours of the airport locations….well, it is just the place that friends and relatives what to come to experience cruising on High ZZ’s with us.  And with all this fantastic fun and opportunity for poor gastronomic behavior, we just could not resist establishing the “Greater Abacos Fritter Challenge”.  The object of the “GAFC” is to rate, independently, as many conch fritter producers as is possible to visit within the timeframe of your fly-in vacation.   The winner of the GAFC is the closest individual to the order of ranking by composite scores of the review panel….sounds complicated, but basically, the person who comes the closest to the average rank of the conch fritters wins a free conch horn to blow at sunset.   What a hoot!  ….So sorry for the bad pun.    But it is impossible to avoid Boat Belly when friends Sandra and Rob came for their second cruising vacation on High ZZ’s.  And then, after already establishing a rotund baby-bump (a small fritter/rum caused protrusion, that is), nephew Pat and his wife Janey flew into Marsh Harbor on the flight Sandra and Rob flew out on.  Well that really did it.  This year’s Boat Belly will take months of exercise at the house in Venice to erode….Oh, the “Blues” part….well we are just sad that more friends and realtives have not taken up the GAFC.  When are YOU coming? 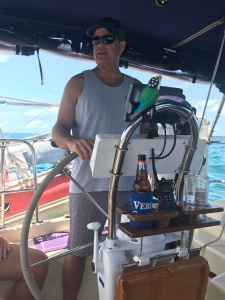