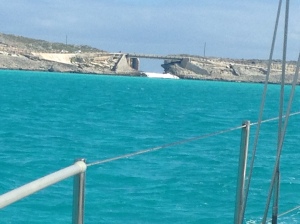 Venturing south from Spanish Wells to the ports/anchorages in Eleuthera and other out-islands generally means negotiating some very “narrow” passes and passages.   None are more daunting than Current Cut just south of Spanish Wells.  In the Bahamas, shallow banks butt up against deep ocean sounds and channels. Water depths can go from 15 feet to 2,000 feet deep in ¼ mile.   Most often, moving from one to the other requires negotiating a “cut” or narrow pass.   Water spills into, or out of these cuts, during the flood or ebb tides as if poured from a large bucket onto a flat pan (envision the ice water challenge, or Bill Bellecheck’s head after the Super Bowl).  Current Cut is the baddest of the bad!  As water rushes off of the Eleuthera Bank into the Northwest Channel during the ebb tide, the current in Current Cut can exceed 8kts…faster than most sailboats can motor.  Add to that an opposing wind and 4 to 6 foot standing waves can build up just outside (deep water side) the cut.   The term “white knuckles” is so, so inadequate.  SYB….  S… Your Britches, is more the feeling.  As a consequence, we go to great lengths to avoid transiting cuts when the wind opposes the current.  We are lucky this time going into Current Cut.  We catch the water going onto the banks during the end of the flood (with the current). We are moving at 7kts…and the engine is just at idle speed.    But, we are unlucky with the wind on the other side…it is from the south, on the nose only 12kts, but….3-4 foot waves on the banks (the shallow water side)???   Et Tu Brute?  …ouch!  Five long minutes of SYB, and then we exit the grasp of Current Cut.

The silver lining after Current Cut is Eleuthera’s  “Glass Window”; another narrow pass that has cut a hole into Eleuthera Island spanned by a bridge.   Once, during a storm, the concrete bridge was knocked 7 ft. off of its abutment by Atlantic waves pounding through.  It is quite a beautiful/scary sight, even on a relatively calm day.

South, past the Glass Window, is Hatchet Bay, our first stop after Spanish Wells.   Also a daunting narrow pass, but not for its current.   The cut into the harbor is only 50 feet wide; the deep water we can transit, maybe only 25 feet wide.   Not much room for error with our 13ft wide boat; and you never want to meet another boat going the opposite direction!  Because of its narrow entrance, Hatchet Bay is well protected from storms, but the town is very sad.  Not a place to hang out long.  So, we are on to Governors Harbor the next day.

Governors Harbor was once seat of Bahamian government, before Nassau took over.  It is another very pleasant place, with well-kept homes and guest houses, and fantastic Friday Fish Fry (crap….it is Sunday).  We found an antique car there that seemed strangely familiar.  Can anyone identify this car?  It looks very much like the 1948 Austin of England car my dad gave me to work on as my first vehicle (we had a “hard” top).  We could not get close enough to see the hood ornament clearly.

From Governors Harbor we moved south again to Rock Sound, to wait out impending weather.   What, you say, pray tell, is “impending weather”.  Well, part of the “narrow passages” gig is that you only have so much time, a narrow window, through/in which to move from Island to island, harbor to harbor.  Impending weather means that some negative wind/storm event is coming, and you want to be sure you are in a good place to wait it out.  There are relatively few, all-around, protected harbors in the Bahamas.  Many places are considered “hurricane holes”…but even these fail miserably in a direct hurricane hit.   Governors Harbor is completely exposed to west winds, so with the impending weather, we must move to Rock Sound.  Even Rock Sound is not ideal; a derecho event (50kt gusts) last year damaged several of our friend’s boats, and one lost their pet dog overboard.  Rock sound is so large that you must move from one side of the harbor to another as the wind clocks around during the passage of a cold front.  And so we wait…moving from the east to west side of the sound as the wind howls in the rigging.  We wait for the next narrow passage window to Cat Island.

LOTS OF WAITING AT ROCK SOUND!!!