Well our third trip to the Bahamas has, at least at the beginning, been the charm!   After a paltry five days waiting at No Name Harbor, Key Biscayne, we got our weather window to cross the Gulf Stream.  Five days, that is a record short time; and the trip across to Bimini took only 7.25 hours (another record)!  We had 2.5 hours of sailing, pure, unadulterated sailing in 15kts on a tight reach…no motor noise…fantastic!  Hard to imagine a much better crossing.   But wait…the euphoria was short lived.   Upon entering the North Bimini channel, we see a local sail/dive boat coming out of the harbor…and it is coming out on the wrong side of the red (remember: red-right-returning, into the port).  He passes two red marks on his starboard side.  Yikes!   Should I follow suit?  He IS a LOCAL.   But, not wanting to explain what I did to my insurance company, I stay the course….red-right-returning.  It is rough; 3+ft swells in the channel.  High ZZ’s approaches the third red mark and I hug it close, hoping even if the deep water is on the wrong side, we will still float in.  Beads of sweat begin to form on my forehead; it is dead LOW TIDE!  We hug the third red mark…and just then, in a trough, the depth sounder flashes 0.2ft under the keel.   We prepare for a crash landing; but just past the mark, the depth sounder flashes 0.8ft, then 1.5, and then 2.5ft under the keel.  We are in!   An ice cold beer, and a good Maduro cigar await the victor as we tie up at the Bimini Bluewater Marina to check into the country. 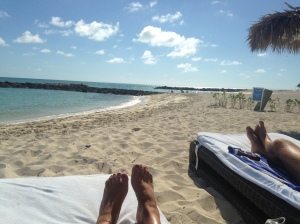 Bimini is chaotic, noisy, a bit run down…we kick ourselves for not continuing on course that day to check-in somewhere further east.  But we are tired, ready to rest, and the forecast is good to continue on in short order.   But there we sit…wind from the east…when will it end?    Only five days layover this time…another record!  We are off to New Providence.    But not so fast, we decide to anchor out “on the banks” rather than do an overnight.  It is “relatively’ calm, but unsettling, anchoring with no land in sight, only wind and waves…and six other boats doing the same thing.  Not that we know any of them, but somehow, it still makes it seem like a good decision (misery loves company).  Crossing the Northwest Channel to New Providence is rough.  Ten to 15kts of wind only 20 degrees off of the bow, but the “big” thing is the swells.  NW Providence Channel funnels wind driven swells from east to west, all the way from the open Atlantic.   Cruising guides recommend making your easterly distance early in the morning, and then turning south toward New Providence as the afternoon breeze fills in.  Captain Shep does not heed this warning and is lulled to complacency by the easy going in the AM.  Bad idea!  We motor-sail with the main only, salt is everywhere.  It is a hard slog to windward, something gentlemen should not do, but 8.5 hours later, we are safely anchored in West Bay.   West Bay, is better termed ”way out bay” in New Providence.  Nothing but private land, houses and a national park.  But a good walk in the park, and we have forgotten all about the tough time getting there.  National parks in the Bahamas are different…four-wheeler tiki tours, beer bars on the beach….boogie boarding behind go-fast speed boats…you will not find that in the US National Parks.

It is Super Bowl Sunday, and we are off to Palm Cay Marina to find a TV to watch.  Much to our great joy, they have set up a projection TV outside…5 beers for $20 (unheard of in the land of $6-8 beer), a plate of wings/fish bites for $20 also.  Only wish the game…no, not the game, which was exciting…but the outcome was better.  SO, SO tired of the Patriots!   So off we go, Tuesday after the “recovery” Monday, to Spanish Wells. 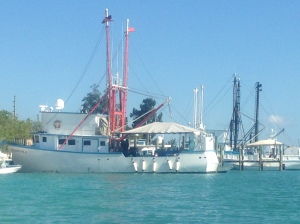 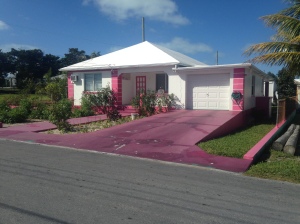 Spanish Wells is one of our favorite places in the Bahamas.  It is said that 75% of the seafood from the Bahamas comes from the fishing fleet in Spanish Wells.  It is a very well kept town with brightly painted houses, clean streets, friendly residents…and a great Valentines Day, prime rib dinner for about what you would pay in the states….also very rare…that is how I like my prime rib…slice it off, and run through the warm kitchen…do not dally….no I meant the price, which is usually 2X  a similar meal in the US.  But no time to dally for High ZZ’s also.  After digesting our meal, we are off further south to Eleuthera.

4 thoughts on “Bimini and Beyond: Third Time’s the Charm”