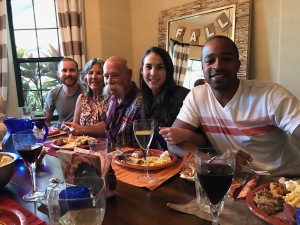 The Clan at Thanksgiving

After a great holiday month…err…two months, we were finally off on our 2017 southern cruise.   It was fantastic to have son Alan in FL for both Thanksgiving and Christmas (with Constance and Andre’, of course).  Unabashed eating (or should we say gorging) is a primary reason for holiday gatherings.   However, I must admit that I am way less capable of consuming mass quantities of turkey, mashed potatoes and gravy (my all-time favorite), and stuffing.  Laying on the floor, like a beached whale, is also mush less appealing than it used to be.    But I still love trying.   We took up golf, again, after a year off; sadly, none of us has improved.  Our project (well really Miss Deb’s) for this trip to the house was a new tile floor in the kitchen.   Really sets the kitchen off.  The beach weather during November and December in Venice was fantastic!  We rarely missed a day on Manasota Key.   Come see us next fall; when you are still stuck up north, somewhere, working to pay our Social Security checks. 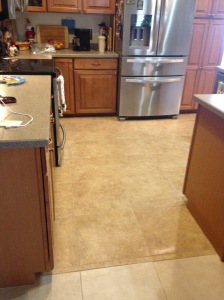 On January 10, we slipped our lines at the Palm Island Marina, and were southbound again.  This time with Admiral Deb’s new “pets”.  Ok, they are really just spice plants, but it does make the boat “more like a home”, according to the Admiral.  I must say, this trip around the horn of Florida was much better than our previous attempt in that direction.  The weather cooperated, we had a good visit with Jim and Laurie at their mom’s place in Cape Coral.  And, it was good to find out that there was enough water to get in to their dock.   Next was a visit with Derek and Rosie, Bahamas cruising friends from last season, who are spending the winter at Marco Island.   Also great to find out that we can get into Smokehouse Bay, at ½ tide or better.  It is a very well protected anchorage, we had mostly to ourselves, on the way to/from the Keys.   Playing “dodge the crab pot”, as usual, cruising past Cape Sable and into Marathon (Boot Key Harbor) on our next leg was exciting.  We actually cut one Styrofoam float in half with our prop; a first!   The pots are often closer to one-another than the length of High ZZ’s, in a grid; making it impossible to clear all of them (even when we are trying).  At night, for some reason, they all seem to disappear?

At Marathon, we were reunited with radio “Marti” in Sisters Creek.  I guess, with our new president, we are no longer “friends” with Cuba, so Marti is deemed essential; just wish they would “tone it down” enough for our boat instruments to work there.  Especially the depth sounder!   Next we hit (not literally) Key Largo and visited the Glass Bottom Bar over the water with windows in the floor, and lights that attract fish at night.  So cool!   Very un-cool….Admiral Deb took the first, impromptu swim, off of High ZZ’s when one of our lifelines failed!  You know, the lifelines that we just replaced, last summer.   Seems a ring pin had worked its way out (very rare).   Deb was just not that impressed at how rare her swim was.   Luckily, the water was quite warm, and she was back aboard in less than 30 seconds (luckily for Capt. Shep, that is).    Then, it was then off to No Name Harbor, in Key Biscayne, to await our weather window for crossing the Gulf Stream.     .