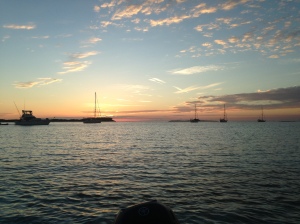 One significant fear I had upon retirement is that both my body, and my mind, would turn to “mush” for lack of exercise.  While working for VT and pretending to be young enough to hang with the wildland firefighting crew, my mind and body were presented numerous “learning opportunities”…you know, exercise that kept the physical and mental systems in operating order (or at least functioning well enough to fool most people).  I would not have dreamed of continuing into my 60’s as a wildland firefighter without a vigorous exercise routine, or learning opportunities for my aging muscles, to insure that, yes, I could still carry 40lbs of water in a bladder bag, up-hill, for 3 miles, and not drop dead when I reached the fire line.   By the same token, my students and colleagues challenged me, on a daily basis, with learning opportunities in forestry that kept my mind well exercised.   But retiring to cruising on a sailboat…all the rum drinks, lollygagging on the beach for days on end….well it just seemed like a good recipe for a mind and body made of mush. 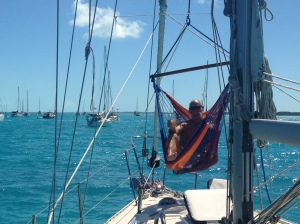 “Not so fast, kemosabe!”  Said the good ship, High ZZ’s.   “I will present you with numerous “learning opportunities”; and I will torcher you, if you fail to learn.”   And High ZZ’s has been true to her word with shining examples in the last few weeks.

Just living on a boat presents endless learning opportunities for your muscles….you see, boats in the water are in constant motion.   This is a huge juxtaposition for land-evolved Homosapieans.  Land, usually, does not move, and we are adapted to a muscle memory system that responds to a relatively stable platform: solid ground.   Have that platform pitch, roll and yaw several degrees, constantly, and your muscles work hard, just to maintain equilibrium.  Have that platform pitch, roll and yaw 4-6 feet at 3-5 second intervals…well your muscles get lots of learning opportunities on how to prevent bashing your head into the bulkhead.   You learn, or should learn, very quickly, that bashing into 4-6 foot seas, right on the bow, is not that much fun; especially not that fun for 10 or 11 hours a day!  Your mind also adapts to all of this motion, as it is common to experience “land sickness” upon returning to terra firma.  Your first shower on land, after a few days at sea, in a small shower stall, can turn you green.

You learn lots of other things, while bashing into these waves and wind (which I forgot my lesson: gentlemen are not supposed to sail “to windward”).   While bashing to windward from Highbourne Cay to Black Point, in the Exumas, I/we learned what the error code: “RUDR DRV “ means when it appears on your autopilot screen.   It means that no amount of resetting of the breaker switches for “Otto” is going to resurrect him, and you must resolve yourself to having to hand steer into that mess of wind and waves, for those many hours, providing a great learning opportunity for your arm muscles.  Even more fun is learning, upon squeezing/contorting yourself into the bilge, behind the rudder dam,  the reason you got that RUDR DRV error code is that Otto’s ram drive has deposited its hydraulic fluid into the rudder dam.  And, upon more investigation, you learn that your 17-year-old ram (that you had told Admiral Deb, that we should carry a spare, but failed to buy one before leaving the States), cannot be rebuilt “in the field”.

And the very next day, during more bashing bashing to windward from Black Point to Georgetown, we learned than you can only bury your bow pulpit in to those big seas, but so many times, before one of them carries away your bow/navigation lights!  Who would have thunk it?   And more so, those cute little solar air vents that you put into deck plates to constantly vent stinky/humid air out of your shower/head (instead of allowing it to blow into the rest of the boat) are not sealed well enough to keep flowing water over the deck from entering your head!  Go figure? 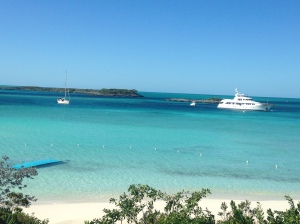 Tired, beat up, wet….all things that Admiral Deb loathes, we finally made it to Georgetown for Regatta Week!  We hope some of the other 300 boat crews here had as many learning opportunities as we did getting to this Mecca of Bahama’s cruising.   Let the fun begin!

A well/over used adage…hurry up and wait.  In the military, in the wildland fire services, anything having to do with the governments…same thing, we seem to hurry up often, and then we wait, and wait, and wait some more, and then hurry up again; and then we repeat the process!  Going anywhere by cruising boat is no different; no time more evident to us than our jumps to our Gulf Stream crossing staging area, to the Bimini’s, Berry Islands and now our new landfall, the Eleuthera Islands…and hopefully beyond.

After waiting for four days in Palm Beach Gardens (you see, a weather event called “tornado warnings” and sailboats do not go well together) we made a quick dash 80 miles south to Key Biscayne’s No Name Harbor.   This well protected harbor (a “key-hole basin” as they are called) south of Miami is a popular jumping-off place for the Bahamas; and more specifically it is only 42nm to the closest island group in the Bahamas: Bimini.  In No Name, you can wait out more tornado warnings for south Florida, as we did for nine days, and the right weather and sea conditions to cross the Gulf Stream.   Tornados in January?   Must be something about the El Nino year.  Well, what weather you want in a slow cruising boat like High ZZ’s is wind directions with lots of S’s and W’s in the forecast (recall that wind directions are where the wind is coming from not where it is going to).  You see, East is where you are going to, and North is where the Gulf Stream is going to.  So, as sailing/motoring “to windward” makes Admiral Deb cranky, and Shep less of a gentleman, we look for West wind.   Also, if you have ever tried to paddle your canoe up river, and the Gulf Stream is a very big and very powerful river (2-7 kts), in a wind coming from downstream, well, lets’ just say you are going to get real wet!   How bad can it get? Six to 10ft waves in the North flowing Gulf Stream are a regular occurrence with any North wind.  Hence the desire for SW wind to cross the Gulf Stream; and something less than 15kts of wind and less than 4’ waves (the height of High ZZ’s bow).  It is a waiting game…and then it comes, a “weather window”!!!

One trouble with many weather windows is that most are far too short!  By too short, I mean that the travel time between where you are, and where you want to get to, far exceeds, or is just barely equal to, the “window” of time that the weather and waves will be “good”.  Unless, of course, you have a powerboat with, one or preferably two, massive engines, any one of which could propel the boat a plaining speeds and get you across the Stream in an hour or three….not the 8 or 9 hours that it takes a sailboat like High ZZ’s to cross to Bimini.  There is one sailboat exception to this go-fast rule I know of… the McGregor 26’ hybrid, you know, like Marshal Spoon’s boat on Claytor Lake.    With 50 or 60hp, that boat can do 25kts in a pinch.  And we found one at the Bimini Blue Water Marina where we tied up to check in with the Bahamian authorities when we crossed January 30th.

Foresters/ex-foresters, and most old sailors, are a conservative bunch…they like weather windows with at least 6 hours of slop in them.  By that, I mean that any “bad” stuff is not predicted until 6 or more hours after you have or planned to arrive safely.  Or perhaps sailors just don’t trust weather persons…How was all that snow in Blacksburg?  Now, we know that all weatherpersons lie…they tell you what you want to hear, not what really is going to happen.  But our weather Guru, Chris Parker of Caribbean Weather Services, has been pretty close this season.  Chris predicted we would have 10-12ks of SSE wind and 2-3’ seas until noon on crossing day.  Yes, against my better judgement, there was an “E” in the forecast, but we were getting antsy after 9 days!  We left No Name at midnight, arrived at North Bimini at 0730…and the E wind cranked up at noon when we were already sipping congratulatory rum drinks and smoking a stogie.  Six+ knot average coming across…look out McGregors!  So far so good.

Then more waiting…it took until Feb 4. to get a weather window to the Berrys.  It is 75+nm from Bimini to anywhere in the Berrys (what you get in a short GS crossing you must “pay back” in a longer next leg)…so some night-time work is also required for slow sailboats.   But to get to the Berrys, you cross the generally more benign Great Bahamas Bank.  We chose to leave Bimini on a rising tide at noon, trying to make the early morning slack tide at NW Providence Channel.  This is a significant “cut” where the deep water meets the shallow bank and very steep waves occur if the wind opposes the current (just like the Gulf Stream).    But, way too fast, our trusty steed was.  Unlike our first crossing of the Great Bahamas Bank, we made such good time that we “had to” stop for a rest at NW Shoal for four hours (midnight to 0400) to wait for the tide.  Our first experience anchoring in the middle of a Bahamas shallow bank…no land in sight…eerie!  Good thing we caught up with four “buddy boats”, who had left Bimini at 0630, who were already anchored there.

And then, three more days/nights of waiting at Frazer’s Hog Cay before crossing the NE Providence Channel to the Eleutheras.  In FHG we stayed at the mostly deserted Bimini Islands Club on a mooring ball waiting out NW winds 25kts gusting to 35kts to cross the NEPC.  And now we wait some more in Spanish Wells.  Luckily, there is a good/cheap marina in this lovely, very well kept, Bahamian village.  Even the commercial fishing boats are beautifully painted…unlike any we have seen in the US.  But now we wait out more 25+kt winds on our way to Hatchet Bay (said to be the best hurricane hole in the Eleutheras)…before waiting and then being off and hurrying to our next Excellent Adventure!