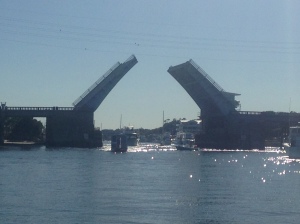 Now that the holidays are over and we are back on High ZZ’s, I am re-learning how much patience and how little worry it takes to cruise on a sailboat.   You see during our working/land-based life, I had so little patience and so much worry…just the opposite of cruising on High ZZ’s.   Much of our land-based life, we needed (well, according to Deb I thought) everything could, and so should, happen NOW!  You know, life in the fast lane, fast food, fast driving, instant texting, email…every time we were confronted with something that seemed to take too long, we simply tried another tactic, or tack…to coin a sailing term.  If one plumper could not do the work until next week, we would call someone else who could fix it sooner.  We always sought out the shortest line at the supermarket.  We wondered, 15 minutes after texting/emailing someone, why they had not responded?  We worried about our kids, we worried about our jobs, we worried about the economy, we worried (well perhaps just I, according to Ms. Deb) about nearly every facet of life; even the things that we could not control.

Life on a cruising sailboat is just the opposite!  I mean really, sailors by nature are so, so patient.   Think of it:  why would they spend so much time, going so slow (relative to our motor-boating friends), often to nowhere in particular; just tacking back and forth for the fun of it?   There are so many other means of conveyance, why choose the slowest method, if you really want to get there?  Just the past nine days, in traveling south from Ft. Pierce (where we kept the boat this break) to Key Biscayne, required an extreme amount of patience.   Nine days you say?  But it is just 130 miles, as the crow flies.  How could that possibly take nine days?  Did we row the boat?

Well so many things that you cannot control, conspire to necessitate patience.   On a cruising sailboat, weather is number one among the things you cannot control (even though this is the 21st century), and so must plan for, rather than worry about.   Failure to plan for the weather you might encounter could be very uncomfortable/costly in boat damage/or even lethal!   This is the reason we spent four days at an expensive marina in a “key-hole” basin in Palm Beach Gardens during the trip.  April/May like Florida weather (read frequent tornado warnings) in January made it necessary to hide for the duration (something about an El Nino).  And then, there are all the DAMN (sorry) the bridges connecting the main land to the barrio island across the ICW.   I mean the beautiful bridges that require patience.  There are 28 bridges between Ft. Pierce and Port Everglades that must open for all but the smallest of boats…and I mean all types of boats (some poetic justice from our fast powerboat friends).  And the patience part about that is that 22 of them only open once or twice per hour.  Which would be fine, if they were all 3 or 6 nautical miles apart (remember our rule of 12’s and 6kt speed?)…but sadly, they are lots of different distances between them, and some open on the hour and half hour, some on the quarter and ¾ hour…you get my drift…and drift is what you must learn to do, with patience.  That is because, invariably, the time you need to get from one to the next often exceeds the time it will take you at any reasonable speed, and there is nothing but worries to be had by anyone who tries to speed up to make the next opening.  Either worrying about the speed against the current you can make, or worry that your little engine will overheat or blowup because it is being over-taxed!   And so you drift, at 2-3 kts between many bridges gaining patience and eliminating worries.

I think there is a word for it…having more patience and less worry…yea, just chillin in No Name Harbor, Key Biscayne… High ZZ’s ;<})