No, not “and you are out” as in baseball, but better, like in bowling when you get three strikes in a row….as in: we have stuck land for the third time in the Bahamas.  First the Bimini Islands, then the Berrys, and now the Abacos!   Feeling more like novices, than rookies now.  Only 10, 12, 15…? More island groups to go (this could take a while).   Bimini – hustle and bustle, the ultra-rich and the very poor, contrasted; the Berrys – more remote and laid-back example of Caribbean culture with a smattering of US/Canadian vacation homes.  The Abacos?…well our much-traveled cruising mentors, Mark and Julie Kaynor described the Abacos as “Florida East”.   And they seem dead right. 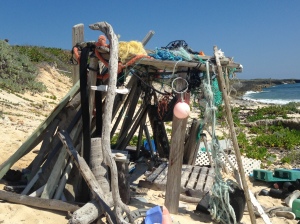 Like Florida, there are little quiet places in the Abacos, like our Venice by comparison to Sarasota; but there are also fast-paced, high-traffic places like Tampa/Miami…only in miniature.   Our first stopover in the Abacos was Little Harbour:  one bar, no churches, dirt roads, no marinas, disserted beach, and eclectic artists…nice!   We tried to get to Hope Town next, but were rejected…no room in the harbor (notice the spelling), no room at the marinas, and no room in the anchorage outside the harbor….no place to park, just like Miami.  So we sailed over to Marsh Harbour, the “big city” of the Abacos, where there is always room to anchor, but you would not want to swim in the water, much like, like, well Tampa; even during Buc’s games, there is always parking available. 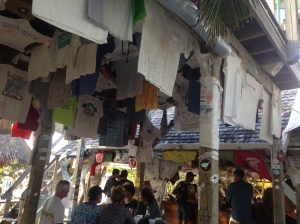 And now, we have finally arrived in Hope Town, which reminds me more of Catalina Island, off of the coast of southern California.  In the 60’s and 70’s, you were hard pressed to find a mooring in Catalina (at least at Avalon) on a summer weekend.  We only got into the Hope Town harbour, because I sprang for a marina berth, in honor of the admiral’s 63rd birthday on April Fool’s Day (oh, I was not supposed to tell how old Miss Deb is).   Here in HT, boutique tourism has taken over the town.  Nearly all of the houses, in the main area of town, are rentals; brightly painted, but quaint old tiny places.  Everything neat and tidy…but you have got to love the beaches and reefs;  beautiful, clean, almost pink sand beaches with water so blue, so many colors of blue…well it hurts your eyes.  We might stay in Hope Town until the weekend…but then we are outta here (never liked Catalina on the WE either). 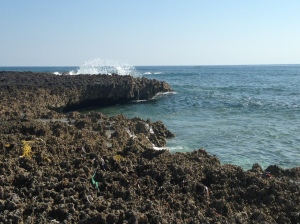 We are meandering our way north…closer to Great Sale Cay, the standard “jumping off” place for a trip back across the Gulf Stream and back to Florida.  Hurricane season is approaching.