We have gained a toe-hold on the Caribbean!  And, well we were very, very lucky with our first Gulf Stream crossing.  We left No Name Harbor at midnight, encountered nothing more than 5-10 kts of wind (but mostly on the nose) with 2-3 ft seas in the middle of the notorious stream, and arrived at North Bimini at 0900 to make the morning high tide.   As we had heard that the entrance channel had shoaled to 5ft, and we draw 5.5ft, we thought it was prudent.   And sure enough, in the middle of the well-marked channel, we found 7.5ft (our 5.5 + the 2ft tide).   We might have made it if we had waited until a more civilized time to leave Key Biscayne, and stuck to the red side as some had advised, but just by the skin of teeth, or rather the layer of bottom paint on the keel.   And so the Bahamas adventure begins. 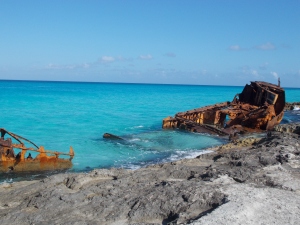 It is true, the water is beautiful….also a bit scary.   When you can see 20-30 feet to the bottom, it looks like you are about to run aground at all times; it is hard to believe your depth sounder.  Another thing to believe is how laid-back the Bimini Customs and Immigration officers are (apparently unlike other ports –of-call in the Bahamas, we are told).   No extra fees for our bicycles, no mention of how much booze we might be importing, just a curious inquiry about wanting to have a fishing permit, but we only have one fishing pole?  “Sure you don’t have any spare poles?”  “Now how many poles was that?”  I guess most folks are much more serious about fishing here than we are.

Bimini Harbor is the antithesis of No Name Harbor.  No Name was full of “weekend-warriors” from Miami; as likely to park right on top of you and your anchor as to drag across into the mangroves, having set out 20ft of anchor rode to hold their 65ft motor yacht in 10ft of water in a 20 kt wind (don’t laugh, one of these nuts dragged right by us at midnight one night).  The 20-50ft long x 50 ft wide “raft-ups” of three or more boats will even move about the harbor tied together in search of good holding.  The “Cuban Navy” as one cruiser called it, shows up Friday night and blasts loud salsa music from speakers twice the size of their boat well into the wee hours and well past the 2200 curfew set up by the Florida Park Service (I guess all the FPS folks go home by then).  A week at No Name and we were ready to get out.  At Bimini, it is the shore-side bars, and impromptu liquor stands that blast the music all night long.   Bimini Harbor is fill of working boats, and cruisers who know how to anchor, or at least most all but one charter we had to help off of a sand bar.  But North Bimini is also an island of complete opposites.  At the south end, Alice Town, is dirty, litter is everywhere, the buildings are poorly maintained, smells of garbage…a typical 3rd world country (or at least similar to Mexico and many other central/south American countries I have visited).  But at the north end, there is Resorts World Bimini Mega-yacht Marina and Casino.  Picture Disney Land for the superrich and, unfortunately this week, superrich college students on spring break.   Disco music at the poolside bar until 2 am, 165ft yachts from middle-eastern countries, meticulously maintained grounds/buildings with not one beer bottle to be found on the sidewalk (the second a student tosses one, it is picked up by the staff)…quite a contrast to Alice Town. 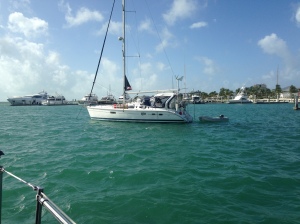 We could afford several days in a marina in Alice Town ($1/ft/night), but not at Resorts World!   But the big saving grace of the north end of north Bimini is that the resort has dredged out a deep (12-15ft) very protected anchorage…just small/unknown enough to allow 4-6 of us poor cruisers to anchor here for free!   And the icing on that piece of cake?  A modest tip to the dock master has allowed us access to all of the pools, bars (as if we could afford a $9 beer), picture perfect beaches, casinos (Deb has already lost ½ of her $20 gambling allowance)…and we are anchored for free!   Our fellow cruisers warned us about being “stuck” in Bimini because of weather….well we could “stick” here for a month, and still want more!

1 thought on “Crossing the Gulf Stream…Piece of Cake!”