Virginity can be lost twice…at least on a sailboat (or what we wish would be a sailboat more often).  High ZZ’s has just completed its second lost virginity transit.  The one where Shep and Deb, with no other crew, and no companion boat, transit overnight, offshore.   A slow, routine, some would say almost boring, trip down the ICW was transformed over two nights into a great leap forward in competence and beautiful weather.   High ZZ’s left Southport NC at 0900 Friday, sailed (well motor-sailed) out the Cape Fear River and arrived at 1000, Sunday in Saint Simons GA.   On a sailboat you say?  Well, do we wish more of one, but we have to continue to sing praises to YP, our trusty Yanmar Powerplant.   It took 49 total hours: 3 hr actually sailing in quiet bliss, 26 hr motor-sailing (not to bad, since engine RPM’s are way down), and 20 hr motoring.  And this seems to be the pattern developing for most transits.   Gone are the days of going down to the boat on Claytor Lake only when the winds are good enough to sail.   When you are trying to get someplace, in a certain amount of time (the vast majority of coastal cruising), well, you have to keep going and get there!  The winds varied from 15-0 kts, most of the time, and when there was enough of the predicted northwest wind, this allowed a broad reach with 1-3 ft following swells.    But too often the wind dropped below 10kts, slowing us way down (High ZZ’s can only sail at ~1/2 of the wind speed), and we wanted to get to Saint Simons while the weather was still fine; so out comes the trusty YP iron wind generator!   Most of the nights were calm motors in <2 ft, swells, but, apparently, King Neptune has not been entirely happy with us, having changed the name of our sailboat.  So we got 14-16 kts on the nose, and 2-4 ft seas to jump into the last 6 hrs of the trip until turning into Saint Simons Sound.    We had to slow way down to keep from slamming into the head-seas, and once, it made Deb bounce so high, she had to change beds to the settee.     But, we are finally in a warm place with 80F days and nights in the 60’s!

And yes, Marshall, we did miss the third crew, making the night watches less burdensome.  But, it was time for us to “grow up” to real couples cruising and do it on our own…but we were not really alone.  Just like our last offshore transit, we had a stowaway.    This little bird made itself at home, probably very tired since it arrived when we were 20+ miles offshore.  But, unlike last time, this one was insectivorous, making itself useful by consuming numerous biting flies and pesky moths.   It stayed with us overnight, sleeping, as you can see, snugly in the cabin…but the little bastard would not get up for its night watches!   As soon as we entered the Saint Simons Channel, it abandoned us and headed for the shore.  Can someone identify our friend (species)? 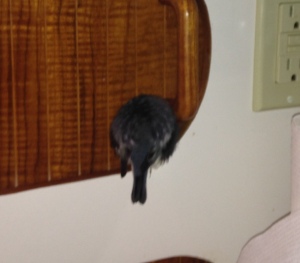 Anyway, we are off to Jekyll Island tomorrow.  Neat place, nice beach…we will have a swim in the 76F water.   We must wait until Nov. 1 to cross south of N 31 degrees, and Jekyll is N 31 04 min….have a nice winter!

1 thought on “Now This Is Warm; or Lost Virginity, Take 2”