You know all that talk about becoming a “paperless society”, and, if you are old enough, that “Paperwork Reduction Act” of 1980 and its 1995 Amendment?  Well we have been learning (seems we must be at least to Lesson 200+ by now) that, relative to cruising boats, such a notion is pure bunk!  Not that I should complain, as a former forester and wood-use pusher.   In November, when we purchased High ZZ’s, we started a file to hold all of the “Ship’s Papers”.   That file is now bursting at the seams and is becoming a major storage issue.

Boats of High ZZ’s ilk are usually “Documented” with the US Coast Guard.  This was a lengthy 3-month process with the exchange of no less than 10 pages of forms, just to receive our Documentation Certificate…which is good for only 1 year!  Agents charge $300+ to “sit on” the USCG and get this for you…I was too cheap, so I did it myself.  And I had to send them an additional “Priority Handling Request” form, when I learned in Feb. that they were just then processing Sept. 2013 documentation forms (since I sent High ZZ’s Documentation forms in December, it was not expected to be processed until this summer some time, long after we would be back from the Bahamas).  Then there is the registration of both High ZZ’s and “Following ZZ’s” (our Achilles inflatable dinghy) with the state of Virginia (more forms, and we have not yet received Following ZZ’s registration).  Then there are radio and electronics forms…heaps of them.  The Federal Communications Commission and international law requires vessels visiting foreign ports to have a Ship’s Radiotelephone Station License.  And, on top of that, anyone wishing to make a radio call using that station is required to have their own, personal, Restricted Radiotelephone Operator’s License….now go figure, why would you what a Ship’s Station License, if you did not want/need to use the radio?  Luckily, I have had an RROL since 1978, when I needed one as a private pilot.  Unluckily, I lost it overboard last year, and of course, in “reducing paperwork,” the FCC did not keep any paper records since the advent of modern computers.  Hence more forms to get a new RROL for Shep and another one for Deb.  Then there are the radio’s safety “distress calling” features, two of them (the VHF and the SSB), they need an MMSI Registration (Marine Mobile Services Identity) number….more forms.  Then there is another very important safety device, the EPIRB – Emergency Position Indication Radio Beacon, that needs its 15 character ID registered with NOAA.  And finally, not to be outdone, the US Customs Service needs an annual “Decal” for “User Services” so that when you leave and enter the US, they can check you in/out.  MORE FORMS!

So some of you have asked: “Well what are you going to do with all of that time, out cruising, once you retire?”….Fill out blessed government forms….I am sure glad I did not try to do this in 1979, before the Paperwork Reduction Act! 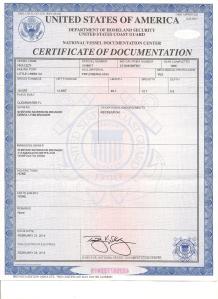 We Finally Got It!

1 thought on “No Escape from Cruising Paperwork”